Located half way between London and Sarnia, Arkona is by all appearances a quiet Southwestern Ontario village with its stores, businesses and residences. Upon further examination, however, you will find that Arkona is far from being a sleepy, rural village. It represents a small but dynamic community that has thrived and prospered for over one hundred and fifty years as a home for hundreds of citizens and a place of business, service and recreation for generations of residents of Lambton County.

Arkona owes its location to the Wisconsin Glacier which covered Ontario over one million years ago. This glacier piled up great mounds of mixed earth, and disrupted the drainage. When the glacier retreated sixteen thousand years ago, the future site of Arkona lay at the base of the Wyoming Moraine along the shores of the ancient glacial Lake Arkona. About ten thousand years ago, a horrific earthquake rocked the entire area and caused a section of the bedrock to drop almost 80 metres into the earth, creating a gorge along which the Ausable River changed course eating its way northwestward towards Lake Huron, through the Wyoming Moraine gravel deposits at Hungry Hollow. This earthquake and subsequent fault valley revealed to the eyes of the world, the rich fossil beds which later would make Arkona world famous being utilized by many Canadian and American universities for research.

Sometime about 11,000 years ago the Arkona area which resembled the tundra-like climate and vegetation of Northern Ontario, was visited every spring and summer, by vast herds of barren ground caribou and isolated numbers of elephant-like mastodons which made their way along the natural highway of the Wyoming Moraine. Following closely were nomadic bands of the earliest natives, the Paleo. Within miles of Arkona, they ambushed the vast herds of caribou. These animals and humans made the long journey south, via the moraine down into Michigan and Ohio areas to winter. Arkona and area are famous for the discovery of Paleo Indian sites which have advanced our knowledge of Prehistoric Life in Ontario.

Over the next four thousand years, the climate and vegetation of Arkona and southern Ontario, underwent drastic changes. It became a Carolinian paradise, with mild seasons which promoted vast numbers of fish, game and a multitude of fruit-bearing trees and plants. As a result of this marvellous environment, Arkona became the host of large numbers of natives known as Archaic, who made their living hunting and gathering. So abundant was the life in Arkona and environs, that these people could live a relative life of leisure, turning their attention to creating artistic, polished stone implements and decorative objects which are still found in the surrounding farm fields of Arkona.

Following the Archaic age, about four thousand years ago, the climate cooled and vegetation again underwent a change. The natives, known as Woodland, no longer could rely on abundant sources of food available at their doorstep. They had to turn to farming corn, beans and squash to ensure enough food to last the long, cold winters. They also lived in small permanent villages for at least 10 to 15 years before moving to another area to harvest the game, plants and trees. Arkona’s first permanent residents were these dwellers of the Woodland sites located around the perimeter.

Arkona, with the Ausable River flowing nearby, was frequently visited over the years by fur traders, natives, and explorers who utilized the area to make their living by trading, trapping or travelling.

The first recorded settlers to arrive in the Arkona area were Asa Townsend and his wife who moved to an area along the Ausable River called, the Bingo, just east of Arkona’s village limits in 1821. Asa and his wife had originally settled in the Byron area of London, Ontario, prior to the War of 1812, at the site of Springbank Park. After the war, Asa was contracted to survey and construct a road, now named after him, the Townsend Line. In 1823, a party of hunters from the London area, became lost, and for three days wandered aimlessly until they arrived at the Townsend cabin along the banks of the Ausable. Here they received the first taste of the famous Arkona hospitality, and were safely returned home. Asa and his wife lived their remaining thirty years of life in the area. In the year 1833, Harriet and Henry Utter arrived and began to farm, just east of the current boundary of Arkona. Their family prospered, and even to this day, the original home they built has been preserved and forms one of Arkona cherished landmarks.

Following the Utters, other families arrived, among them, the Smiths, the McPhersons and the Eastmans. By the early 1840’s the community at the crossroads of the Townsend Line and the later King’s Highway was developing with various businesses. It was known during these times variously as Bosanquet, Smithville, Smithfield and Eastman’s Corners. By 1857, however, it was given its present name, Arkona, after a medieval castle located on the Isle of Rugen in Germany.

With abundant water sources and large hills in the Arkona area, millsites abounded and formed the first major industry for the new community. Mills were established in the mid-1800’s at Rock Glen, Hungry Hollow, and in Arkona. Along with the mills came general stores, tradespeople, hotels, workers and churches. Arkona was located along major travel routes to Lake Huron and to Lake St. Clair. As a result, its population grew and the community prospered. Farmers soon discovered that with an abundant supply of groundwater, and high hills in the north, the farmland was ideal for most crops, especially fruit trees. Soon Arkona’s surrounding fields were covered not only with crops of every description but also large fruit orchards. These led to the development of an export trade of fruit with the United States, and Europe. An apple evaporator was constructed at the current site of Utter Park where fruit was dried, packaged and shipped often in baskets and boxes made locally. With the development of dairy farms, a cheese factory was also built.

In the 1860’s and 1870’s the coming of the railroad, made or broke communities. Arkona did not get a railroad but it did not die either. Instead, because of its ideal location at the crossroads, it continued to be a major centre of commerce and business in Lambton County. Indeed by 1876, it was made a village. Its location near Rock Glen made for a marvellous site for hydro-electricity which was created in 1907 with the damming of the river, five full years before Ontario Hydro was formed. While most rural communities did not receive their electrical service until the 1930’s and 1940’s, Arkona was serviced by the power dam at Rock Glen until Ontario Hydro took over in 1926.

Arkona has undergone much change. Indeed as you walk the main streets of Arkona, you will notice evidence of this change. Where the Home Hardware Store is located, was originally the Royal Hotel. East of the Hotel, was the egg grading station operated by the Marsh Family which shipped eggs all the way to Toronto which led to the development of the Marsh Transport Company. The GOCO Gas Station, was the Royal Hotel barn and outdoor skating rink. The barn was turned into a hardware store, operated by Otto Smith, and a gas station was eventually put at one end. Next to this , near the corner, George Marsh, moved an old wooden barn onto the site and converted it to a mill which grew into the Arkona Feed Mills(now Cargill) . That mill was destroyed by fire in 1970.

Fire has done much to change Arkona’s appearance. The only original block of buildings which existed at the time of its 1876 foundation is the Old Country Store, and Arkona Variety complex. It survived the famed fire of 1884 which wiped out three quarters of Arkona’s corner buildings. The Old Country Store was formerly Bert Field’s Department Store and before that, Brown Brothers Department Store featuring drygoods, a post office and a seed store. Next to this was Crawford’s Hardware which became Lucas’ Hardware and then Brown’s hardware. Next to the hardware was Huntley’s Drug Store now the site of the Variety and Pizza shop.

The Senior’s Community Centre and Fire Hall is located on the site of a Photographer’s shop, a basket shop and a bake shop. Eventually, Lloyd Paisley operated a gas station and car repair shop at this site. Where the fire hall is located was not only the old fire hall, but also gaol which was torn down to make way for the present complex.

The Cherry Blossom Restaurant is located on the site of Fuller Brothers Store. This two story building hosted not only a dry goods section, groceries, and hardware, but also a tailor shop and millner shop, with a theatre upstairs.

Next to the bank, where the plaza is located, was the site of the Furniture/Undertaker’s shop with a barber shop located beside it. The businesses fronted on the street and the owners’ residences were located behind. It was here in July of 1884, in the furniture shop that the fire which destroyed most of downtown Arkona began. After the fire, a bake shop and restaurant, and later a butcher shop were built. Next to the bank, was the site of Cliff’s Hotel which was also built after the fire.

Much of the face of the old village of Arkona has altered through the years. Nevertheless, Arkona has maintained itself quite well. A visit to the old cemetery will show that generations of residents have returned to be buried here. The War Memorial lists proudly the names of those brave individuals from Arkona and area who sacrificed their lives so that we may enjoy our freedom and liberty.

Arkona’s history is not one of violence or disaster, but a story of individuals who worked hard and helped build a community of which everyone is proud. For over one hundred years, Arkona’s students were educated in village schools. Now students, both elementary and secondary are bussed to nearby Forest for their education. Arkona boasts of three active churches with Elim Gospel Hall, Arkona Baptist Church. At one time in the 1950’s Arkona had five active church congregations.

Arkona has also had a rich history of sports. Many tales abound of famous ladies and men’s baseball teams of the past. Utter Park was dedicated at the celebration of Arkona’s Centennial on July 1, 1976 by the Lieutenant -Governor, Pauline McGibbon whose husband’s ancestors were among Arkona’s earliest settlers.

Arkona’s famed Lions Club Indian Artifacts Museum, operated from 1971 to the late 1980’s by its creator, Ted Baxter, was officially opened by Jean Cretien when he was Minister of Indian Affairs and Northern Development. The musuem was moved to the Rock Glen Conservation Area when Ted Baxter retired as curator.

Arkona has been a pioneer community in a number of areas. It was one of the first rural Lambton villages to build its own Medical and Dental Centres with the leadership of the Arkona Lions Club. Arkona again with the leadership of its Lions Club developed the Fire Hall and Seniors’ Centre, in 1976. The Lions Orchard View Non-profit Housing project was opened in May, 1986 by Lieutenant-Governor Lincoln Alexander. Along with these developments, Arkona has seen the construction and installation of its own water supply, in the late 1980’s and a Sewage Treatment Plant and early 1990’s.

Arkona remains a vibrant, active centre of business and life in Lambton County. Much has been done to make Arkona a truly wonderful place to live or visit. 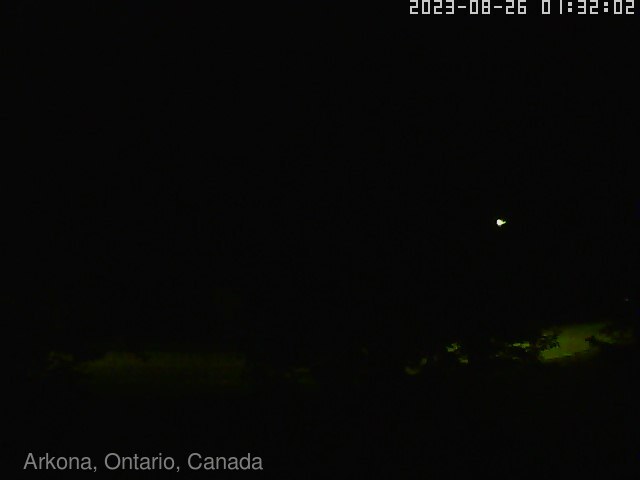